Johannesburg, South Africa - When a newly elected President Obama zipped through Africa in 2009, he was given a hero's welcome on the continent of his father's birth. This week, after four years away and few major initiatives aimed at Africa, Obama will return as a prodigal son.

Initial euphoria over the election of the first African American U.S. president has given way to disappointment with his perceived lack of interest and action on issues in Africa not related to America's security.

Obama's six-day tour - of Senegal, South Africa and Tanzania - is designed to reinvigorate Washington's flagging engagement and reward countries that have made democratic transitions. At the same time, the president will avoid influential nations whose leaders are deemed too controversial or corrupt.

For African leaders, who are increasingly used to welcoming delegations of senior Chinese officials, the declining U.S. visibility seems less important than it would have a decade ago, when the relationship with Washington was paramount, analysts say.

Some of the world's fastest-growing countries are in Africa. The dramatic expansion of the middle class, cellphone ownership and the Internet are creating vast new opportunities. Young Africans - and their leaders - appear confident, assertive and less anxious about being in or out of favor with the U.S.

"I don't think there's a sense that America's relationship makes or breaks Africa," said analyst Steven Friedman of the University of Johannesburg.

Obama's challenge is to convince the increasingly skeptical audience that his administration is serious about the growth of their continent. In the wake of the presidencies of Bill Clinton and George W. Bush, who both undertook legacy-making aid programs, America's Africa policy seemed to lose momentum.

"President Obama came in and there was this sense of stall, in a way," said Jennifer Cooke, director of the Africa Program at the Center for Strategic and International Studies in Washington. Though the administration worked on modest partnerships with African governments, "they weren't big, splashy initiatives that got people's attention either in Africa or here at home. And no big money and no big ideas that really helped define what Obama is about in Africa."

U.S. policies are widely viewed as focusing on security and counter-terrorism at the expense of trade and aid. An emphasis on democracy and trade on this week's tour is meant to counteract criticism that Obama is more interested in drones than development.

The president will attempt to define his administration's approach to Africa beginning Wednesday night in Dakar, Senegal, where he is to discuss a food shortage with agricultural leaders.

He then travels to South Africa to meet with President Jacob Zuma and tour an AIDS clinic. He'll end the trip in Tanzania, a small but important ally with major oil and gas reserves, with an event highlighting efforts to bring electricity to East Africa.

White House aides acknowledge that the trip comes none too soon.

"When we look back 20 years from now, 30 years from now, we'll see this potentially as a pivotal moment when Africa took off in terms of economic growth, when you saw economic opportunities open up for the United States and when you saw democratic consolidation," deputy national security advisor Ben Rhodes said. "That's not to minimize the challenges. But this is a place where the United States needs to be present."

The declining health of former South African President Nelson Mandela could overshadow Obama's visit. The White House says Obama has no specific plans to see the 94-year-old anti-apartheid leader, who is hospitalized in critical condition. U.S. officials will defer to Mandela's family on whether Obama will visit the ailing leader.

Obama's itinerary snubs some of America's strategic allies. Though Senegal recently held a democratic election, it's not nearly as strategically important as Nigeria, Africa's most populous nation and a major oil producer that is battling a homegrown Al Qaeda-linked terrorist group.

Tanzania has plenty of oil and gas, but Kenya and Uganda are more important players fighting an Al Qaeda-linked terrorist group in Somalia, lately the key American priority in Africa.

In Kenya, the site of his father's grave and home of his step-grandmother, Obama's decision to stay away because of International Criminal Court indictments against recently elected President Uhuru Kenyatta and Vice President William Ruto is perceived as a snub and condemned as hypocritical, given that the U.S. also doesn't submit to the court's rulings.

The U.S. hasn't uniformly applied its high bar for engagement, according to critics. Countries such as Ethiopia, Uganda and Rwanda, not included in the tour, have authoritarian leaders but have also been helpful allies on security, said Richard Downie, a fellow in the CSIS Africa Program.

"You have this clash of dilemmas that happen when policy principles rub up against this sort of real-world realities," Downie said. "And that leaves the U.S. open to accusations of double standards."

Lectures about democracy and platitudes about trade and economic cooperation that aren't followed up on don't cut it anymore in diplomacy with Africa, analysts say. 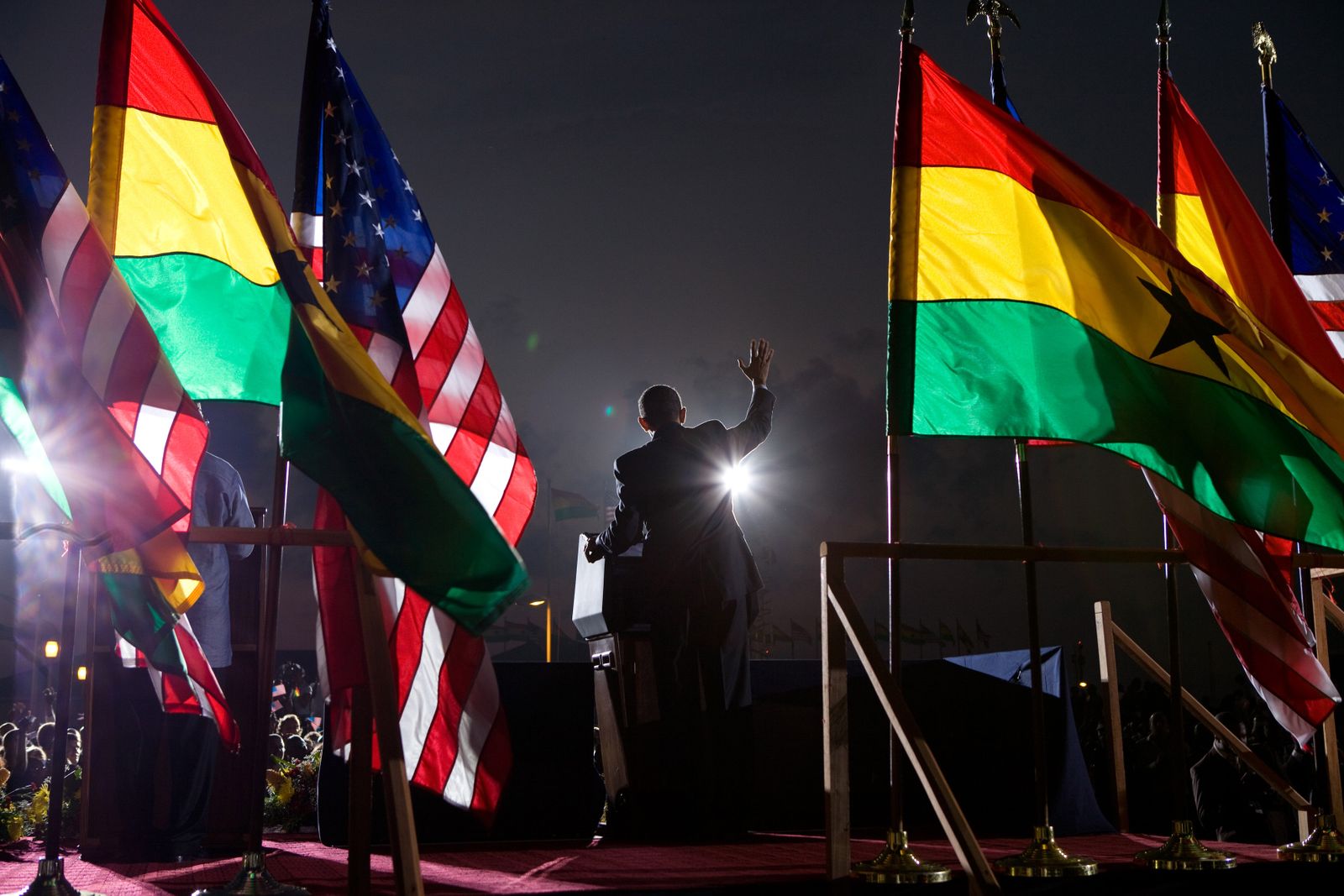 People in Accra, Ghana, cheer during a departure ceremony for President Obama after his visit in July 2009