New York - New York became the first state since the Newtown, Conn., school massacre to tighten gun laws, passing a wide-ranging bill Tuesday cracking down on assault weapons and ammunition that lawmakers say should set an example for Washington as it tackles the issue on the national level.

The Secure Ammunition and Firearms Enforcement Act, or SAFE Act, gives New York the toughest gun laws in the nation and touches on the mental health issues that both pro-gun and anti-gun activists say should be part of any new legislation. Among its key provisions is one requiring the revocation or suspension of gun licenses held by people who are deemed a danger to society by mental health workers. The bill would require mental health workers to report such patients to authorities.

The bill also expands the definition of an "assault weapon" to include semiautomatic guns with just one feature commonly associated with military weapons. Previously, the term applied to semiautomatics with two features.

It limits magazines to seven rounds of ammunition, down from 10; enhances monitoring of ammunition sales to flag high-volume bullet buyers; expands the requirement for background checks on weapon buyers to cover private as well as commercial transactions; and requires gun licenses to be recertified every five years. Previously, in most counties, gun licenses never expired. It also increases penalties for illegal gun use and possession, and for those who use firearms against emergency responders.

"This is a complex, multifaceted problem, and this is a complex bill that addresses the full panorama and spectrum of issues," Gov. Andrew Cuomo said as he signed the bill into law less than an hour after its 104-43 passage in the Democratic-controlled Assembly. Late Monday, the Senate, where Republicans are the majority, passed the bill, 43 to 18, something Cuomo said proved that "common sense" could overcome partisan divides on the topic of guns.

"Common sense can win," said Cuomo, smiling broadly. "You can overpower the extremists with intelligence and with reason and with common sense."

His comments seemed directed at lawmakers in Washington, where President Obama plans Wednesday to reveal his gun policy proposals, the culmination of a nearly monthlong effort by the administration, led by Vice President Joe Biden, to identify ways to reduce gun violence.

On the eve of Obama's announcement, fatal shooting incidents were reported at adult-centered schools in Missouri and Kentucky. A student at Stevens Institute of Business and Arts in St. Louis shot and wounded a school official and himself. Two people were killed and one was critically wounded Tuesday night by a gunman at Hazard, Ky., Community & Technical College, according to local news outlets.

Obama and Biden will be joined Wednesday by children who wrote to the White House after the elementary school shooting in Newtown, where 20-year-old Adam Lanza opened fire with a Bushmaster semiautomatic weapon on Dec. 14, killing 26 people, including 20 first-graders.

The Newtown shooting, along with one Christmas Eve in Webster, N.Y., that killed two firefighters, spurred New York lawmakers to move quickly toward stiffening gun laws - too quickly, according to the National Rifle Assn. It described the legislation as a "draconian" bill hammered out in backrooms without the consideration necessary to make the laws effective.

"While lawmakers could have taken a step toward strengthening mental health reporting and focusing on criminals, they opted for trampling the rights of law-abiding gun owners in New York, and they did it under a veil of secrecy in the dark of night," the NRA said of the bill, which passed on the second day of the 2013 legislative session.

People touched by gun violence, though, said they hoped Washington could move as forcefully and rapidly.

"I'm confident they will do it. They did it in 1994," said Roxanna Green, referring to the 1994 federal assault weapons ban that expired in 2004. "I don't know why, after so many mass shootings, they wouldn't do it again."

Green's 9-year-old daughter, Christina-Taylor, was one of six people shot to death in Tucson in 2011 during an assassination attempt on then-Rep. Gabrielle Giffords, who survived. On Tuesday, Green joined a small protest at a Wal-Mart parking lot in Danbury, Conn., about five miles from Newtown, to demand that the retailer stop selling assault weapons at some stores.

Darren Wagner, a Newtown resident who was among the protesters, said that even if Obama worried about backlash from Republicans, he should fight for an assault weapons ban. "Sometimes you have to send a message by fighting a battle you know can't be won," said Wagner, a retired sheriff's deputy. "There comes a limit."

Wal-Mart said it was trying to strike "the right balance" in its firearms sales, and noted that it did not sell handguns in the continental U.S. and limited sales of modern sport rifles to fewer than one-third of its stores, mainly in areas with high concentrations of hunters and sportsmen. It also does not sell firearms online.

"This is an issue we take seriously and have taken a number of steps above and beyond what the law requires to help ensure we are being responsible," said Wal-Mart spokeswoman Ashley Hardie. 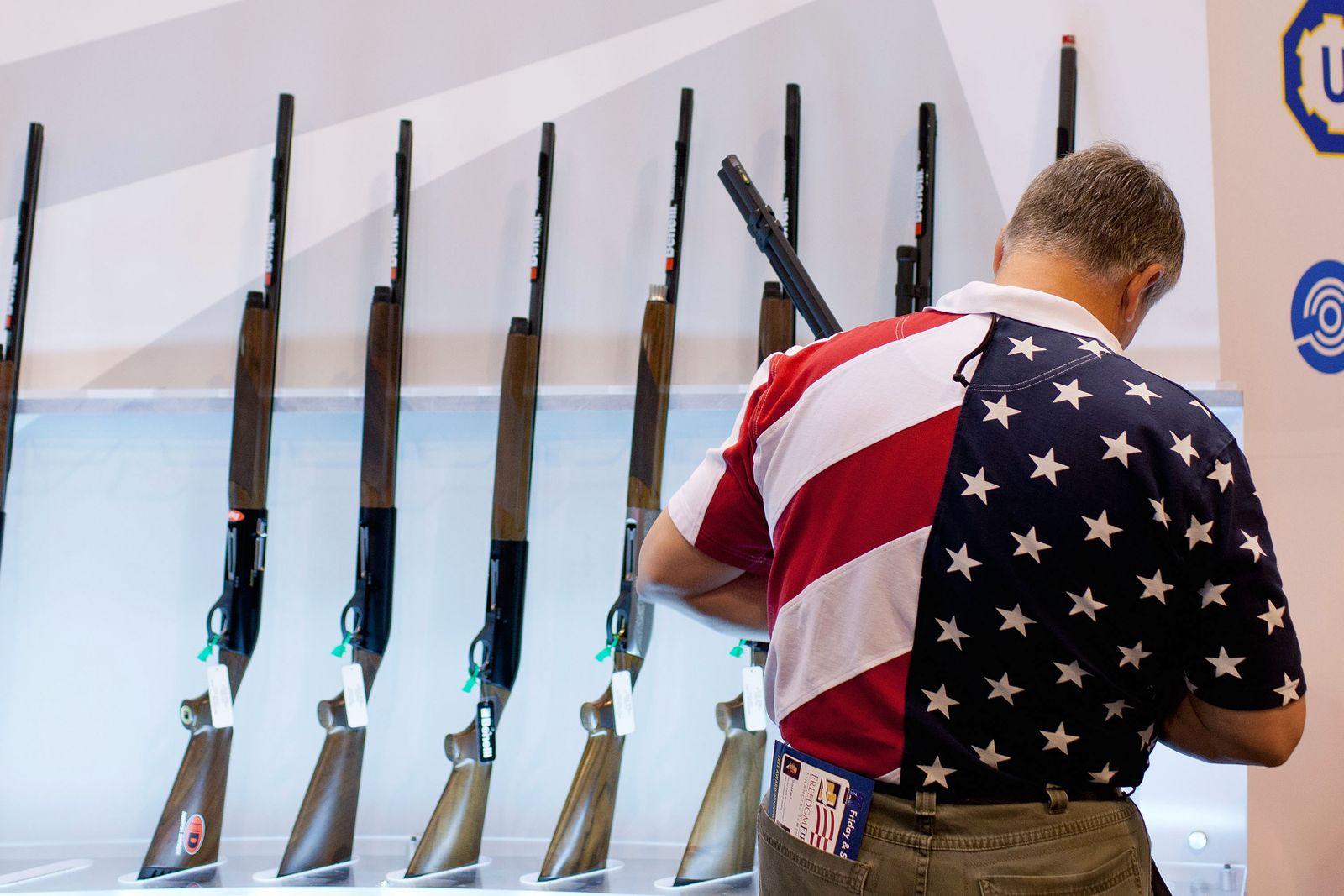 A man looks at the Benelli display of shotguns during the NRA Annual Meetings and Exhibits 2012 at the Americas Center in St. Louis, Missouri