Landfall came at 6:45 p.m. in Plaquemines Parish, La., southwest of the mouth of the Mississippi River, the National Hurricane Center said. By 7 p.m. in downtown New Orleans, wind was bending trees like rubbery posts, rain was pelting down and the water of Lake Pontchartrain churned white-capped waves ashore.

"Isaac is with us in a very significant way," Mayor Mitch Landrieu told reporters Tuesday night as he provided the first details of flooded roads, downed trees, power outages and flying debris in the city. At least 150,000 homes and businesses were without power, officials said.

Isaac, a Category 1 storm expected to linger over the Gulf Coast and inland areas for up to two days, will test the multibillion-dollar effort to improve and fortify a New Orleans flood-control system that failed spectacularly in 2005.

After residents fled low-lying areas under mandatory evacuation orders, the U.S. Army Corps of Engineers expressed confidence Tuesday that its revamped network of levees, floodgates, floodwalls and pumping stations would hold against a sluggish but massive storm likely to deliver heavy rain and widespread flooding.

"We're in a hunker-down phase now because the storm could sit over us for a while with a lot of wind and a lot of rain," Landrieu said. "If you've stayed, you should be executing your plan, with the food, water and all the things you need if you have to stay home a few days."

With New Orleans essentially shut down, residents faced a siege of sorts, with the threat of tornadoes and extended power outages in a city that constantly battles high water. The situation was just as tense along the Mississippi and Alabama coasts, which faced the same dire predictions as New Orleans: storm surges of 6 to 12 feet and rainfall totals of up to 20 inches in some areas.

In New Orleans, officials said search-and-rescue teams were gearing up to patrol when the wind subsided. No deaths or injuries had been reported by late Tuesday. Electricity crews said they would have to wait until the wind died to 30 mph before making repairs.

At 10 p.m., Isaac's eye was 75 miles south-southeast of New Orleans and creeping northwest at 8 mph. The slow pace means the 350-mile-wide storm will probably settle in place after landfall, lashing at least three states with wind and rain, the National Hurricane Center said. The center described "a dangerous storm surge along the northern Gulf Coast."

Much of the Mississippi Valley and the Southeastern U.S. also face days of dismal, soaking weather.

"It's going to take till the weekend before this gets out of the Southeastern states," Rick Knabb, director of the hurricane center, told reporters in a conference call.

Isaac's effect was felt even before landfall: Oil platforms, refineries and petrochemical complexes had shut down. The New Orleans airport was closed, bus and Amtrak service was suspended, and the lower Mississippi River was closed to vessels.

Memories of Katrina remain raw seven years after the Category 3 hurricane battered the city and the Gulf Coast with 125-mph winds and a 28-foot storm surge, inflicting billions of dollars in damage and killing more than 1,800 people, mostly in Louisiana. Few people spoke of Isaac on Tuesday without first mentioning Katrina.

New Orleans City Council President Stacy Head praised the coordination she saw among local, state and federal agencies, which she said was lacking before Katrina.

"This is what government was supposed to do years ago and didn't," Head said earlier in the day. "We are as ready as we possibly can be."

Filmmaker John LaTier came to New Orleans from Sacramento two weeks after Katrina to help with recovery efforts and never left. He spoke Tuesday of a recurrent flooding threat that never seems to subside.

"We're already underwater," he said as he stood on one of the city's levees. "It's a matter of basic math. It doesn't matter how much wind we have - it's the water." 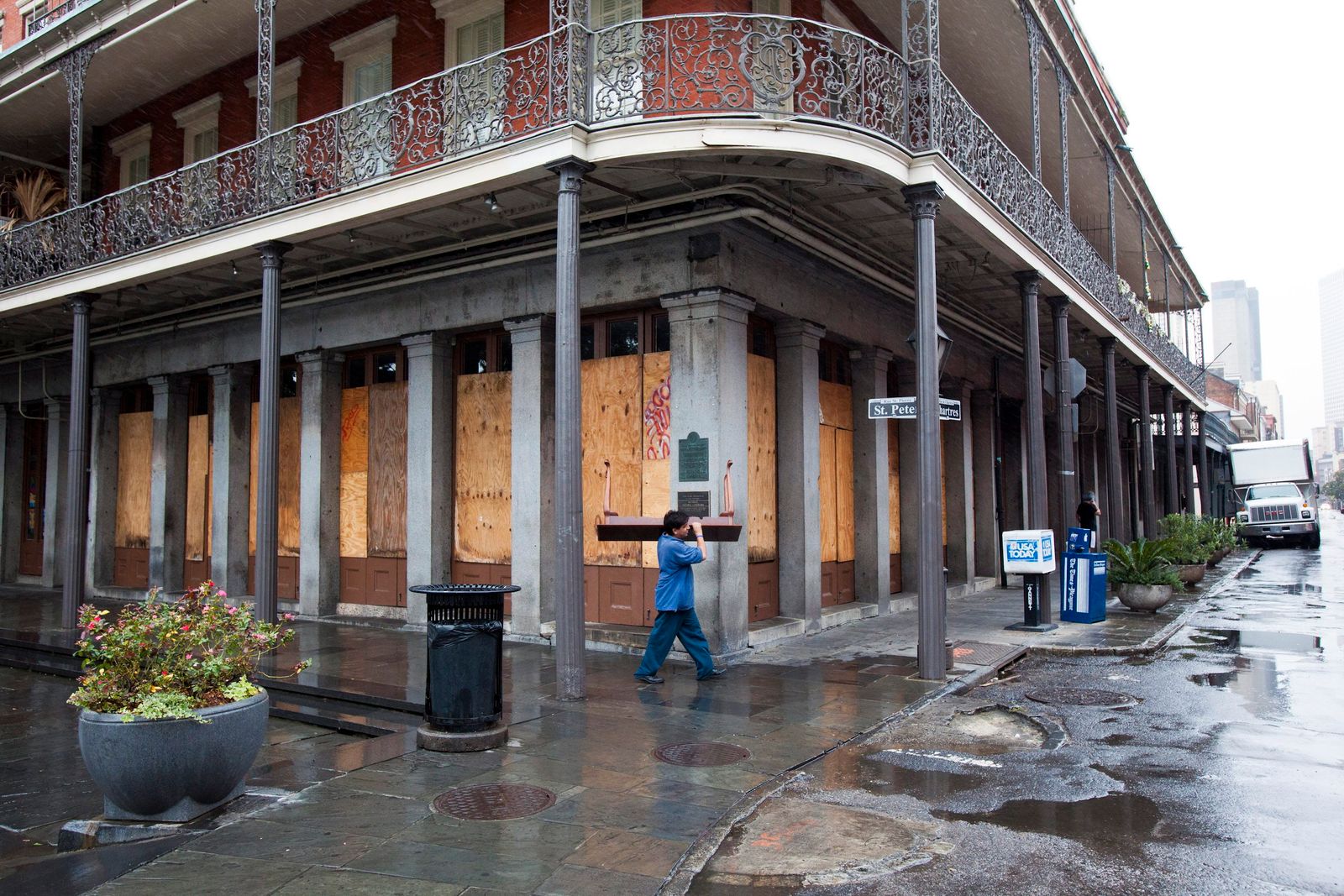 A resident moves some of his personal belongings near the boarded up Pontalba Apartments in Jackson Square in the historic French Quarter in a last minute preparation for Tropical Storm Isaac, in New Orleans