Krakow - When Mario Balotelli gets up in the morning and leaves his room at the Turowka hotel in Wieliczka, the Polish town hosting the Italian national soccer team during the Euro 2012 soccer championships, he will inevitably pass a teammate in the hall. Sometimes he says 'ciao', and sometimes doesn't. No one ever knows how it will go, not even Balotelli.

It's not that the 21-year-old star striker is rude, he's just in his own world. "He's like all naturally talented people: he's not got a clue what he's doing," said of him singer Noel Gallagher who recently interviewed him for the BBC.

This is quintessential Balotelli: he scores a goal, and gets angry. Or, at the very least, doesn't celebrate. It happened again on Monday, in Poznan, when Italy played Ireland. After his goal, came the rage. Only Italian defender Leo Bonucci was able to stop at mid-sentence the "Sons of ..." Balotelli screamed in English at the Irish supporters who had booed him.

On Tuesday afternoon, the coach of the Italian team, Cesare Prandelli, called him to debrief. "What happened? Were you mad at me?" he asked, like a patient teacher with a troublesome, but gifted student. "No, I was mad at everyone," Balotelli admitted after a five-minute chat. According to his manager -- and translator of his moods -- Mino Raiola, Balotelli feels that when Italy wins, people credit the team; when they lose, they blame Balotelli. People say that he has the devil inside. Maybe he is just a big child. But he is no longer a teenage phenomenon, and this is no longer an acceptable excuse.

It is time to grow up, because people around him are getting tired of his tantrums. "When he will finally understand that no one has it in for him, and that we are all here to help him, he will become a world-class player," said Prandelli.

"He hates reporters because he cannot understand why they are so interested in him," a teammate says. In Krakow, he fought with photographers and broadcast journalists when they spotted him with his new girlfriend. On Tuesday, he limited himself to an ice cream and a walk.

"Mario is a golden boy, but I think that there are some uneasy situations, such as the criticisms and the bench, that everyone has to learn to accept in order to become a champion," says Prandelli. "Or maybe the team is asking something more of you, because they know you can give it more."

Before the match against Ireland on Monday, the team told him that it was everyone's big chance, not only just his own. In the end, Italy succeeded, and next Sunday faces off against England in the quarterfinals.

Balotelli's goal -- after one by Antonio Cassano -- was crucial. This is why Prandelli's final evaluation is positive. "He entered [in the second half] and did what we had asked him to do," the coach said. "The smile must be spontaneous. If it is planned, the celebration never works." He added. "Or maybe he has not understood yet how to celebrate. Maybe in that moment he has many thoughts. He stops and is not able to express what he feels."

Balotelli's early years were difficult. He was born in Sicily, to Ghanaian immigrants. Plagued with health problems which required many operations, an Italian couple took him as a foster child when he was just three-years-old.

Everyone says that Balotelli is a "good" person in the end, and always ready to help. On the other hand, he is also "hyper-sensitive and childish," and sometimes goes too far with jokes and silliness. On Tuesday, he was having fun kicking the ball as strong as he could against his teammates' heads. Even when he plays, he can get on people's nerves.

There is one last point that must be confronted. For sure, Balotelli is the first black player to play for the Italian national soccer team in a major tournament, and he has been racially taunted by fans. "Racists are everywhere," notes Prandelli. "But often Balotelli is booed for another reason: he is a formidable opponent who often brags and becomes unpleasant."

Becoming more a part of the team is an essential, but difficult goal. "Balotelli is like this. It looks as if he was a stranger in the team, but it is not true. It depends on the moment and on the mood," Prandelli explains. It is understandable to be moody once in a while - but when it's always, it's just childish. 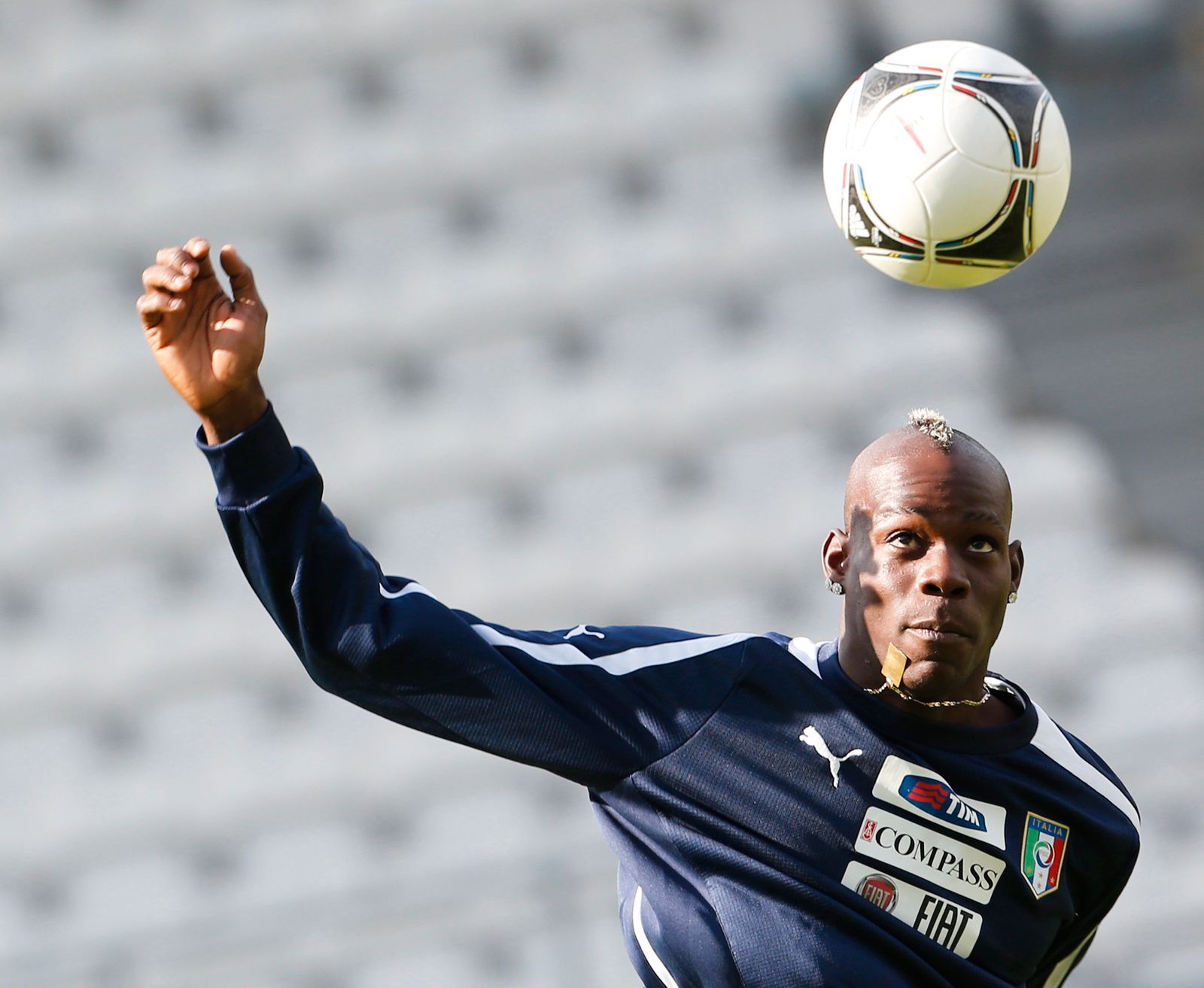 Eyes on the ball: Italy's Mario Balotelli during a training session