Santagostino - Bruno Cavicchi says that he woke up at 4:04 a.m. on Sunday to a "horrible noise." It was a magnitude 6.0 earthquake rocking northern Italy. That noise might have been the last sound that Bruno's son would ever hear. Nicola Cavicchi was one of the four night-shift workers killed by the quake when their factory ceilings collapsed on them.

The terrible noise that woke Bruno Cavicchi and people across Emilia-Romagna, Veneto, Lombardia, and Tuscany regions, came from the bowels of the earth. The earthquake killed seven in the hardworking terrain of the Po Valley, dotted by warehouses, small factories, farms, and out-of-the-way villages. Four of the victims were workers killed by collapses inside their factories. Among the other victims were Gabi Ehsemann, 37, a German woman who was in Bologna for work, and Anna Abeti, 86, who suffered a heart attack. The oldest victim, 103-year-old Nerina Balboni, was killed when her home's roof collapsed.

Their individual fates tell the story of a region's tragedy. A union man dies instead of someone else. A worker close to retiring, who still worked the overnight shift, never makes it to retirment. An immigrant worker who'd dreamed to bring his wife to this foggy slice of Italy. Their sad destinies reveal the industriousness of this land, the way people here lift themselves up, and always lend a hand to others.

There are the stories of the victims, and the stories of the survivors, with the despair of what can never be recovered and who they'll never see again. The earthquake "is gone, but it took away friends," says the priest of the village of Sant'Agostino, where three men were killed and the town hall is in ruins.

Truth is that the earthquake is not gone yet. Aftershocks continued to be felt on Sunday and Monday morning. And the deaths on the work place, if possible, are even more painful. The 60-year-old Gerardo Cesaro, close to retirement, worked at Tecopress, a maker of aluminium car parts in Dosso, near Sant' Agostino. His shift was due to end at 5 a.m.. At 4 a.m. Cesaro was working with a 35-year-old Pakistani man, who was ready to throw himself under a large piece of machinary when he felt the trembles. He lost a finger, which was cut off by the blade of the equipment, but he managed to save himself. Cesaro disappeared. He was found on Sunday at noon, under the rubble.

By then, the corpses of three other workers had been recovered. A falling beam killed 35-year-old Nicola Cavicchi, and 50-year-old Leonardo Ansaloni in a ceramic factory of the company Ceramica Sant'Agostino. Cavicchi hadn't been scheduled to do the night shift. He was called while having dinner with his mother, in order to cover for a colleague who was sick. "It's ok. Anyway it's raining," he said.

On Sunday, among the ruins of the warehouses, Ceramica colleagues were crying, and the union representative, Vittorio Battaglia, kept saying the he could not believe it. "It's like living a nightmare," Battaglia said. The others kept just crying and hugging each other.

The workers of these small warehouses are like a big family, spread across the Po Valley, which now look like a war zone. Driving along the local highway, bordered by poplars, you could see ruins, destruction, and workers with their heads hidden in their hands. The earthquake did not move the trees, but it made some of the warehouses crack in half.

"Seeing new buildings such as these warehouses collapse for an earthquake, which was strong, but not exceptionally strong, is not acceptable in a modern society," said Stefano Gresta, president of the National Institute of Geophysics and Volcanology.

In one of these warehouses, the earthquake took the life of Tarik Naouch. The 29-year-old Moroccan man, was working in the town of Ponte Rodoni di Bondena, in the polystyrene factory Ursa. A falling concrete shaft killed him. Naouch's father said they had been in Italy since 1990 - working different jobs - and that his son was waiting for his wife to finally arrive from Morocco to join him. 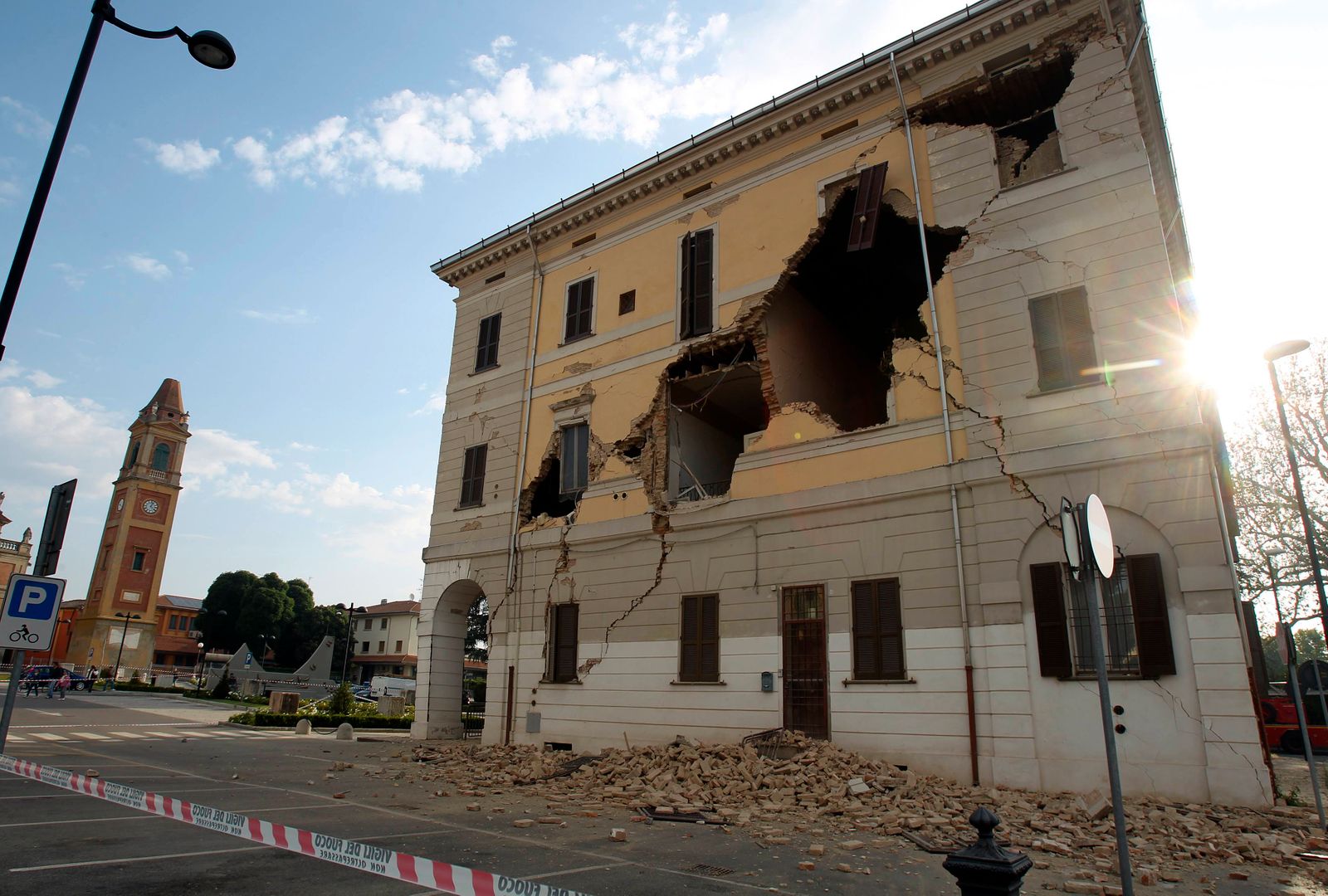 The Town Hall building on Santagostino near Ferrara is seen damaged after an earthquake May 20, 2012.