Reporting from London - European leaders signed a new treaty Friday committing their countries to balanced budgets and low levels of debt, but clouds of doubt hovered over the agreement even before the ink had dried.

The accord is the linchpin of a German-led strategy for resolving Europe's stubborn debt crisis and for preventing a recurrence. It enshrines fiscal restraint and envisages an unprecedented centralization of power at European Union headquarters in Brussels, which can penalize nations that stray.

But the pact still requires ratification by the 25 signatory nations' parliaments. (Britain and the Czech Republic are the only EU members to opt out altogether.) For its part, Ireland announced that it would let its voters render their verdict on the deal in an upcoming referendum, whose outcome at this point is too close to call.

Within hours of the treaty-signing ceremony Friday morning, Spain announced that it wouldn't be able to meet its target of a government budget deficit amounting to 4.4% of gross domestic product in 2012, a level it had previously agreed on with the EU. Weighed down by heavily indebted regions, Spain said it would shoot for 5.8% instead, which could subject it to EU sanctions.

And in the Netherlands, an ardent champion of the need to maintain fiscal discipline and punish those that don't, official forecasts this week predicted a budget gap of 4.5% next year, well above the 3% limit set out in the new treaty, which takes effect in 2013.

The news out of Madrid is especially unwelcome because, along with Italy, Spain is one of the big Eurozone nations that leaders are desperate to protect from being swallowed up by the debt crisis. The smaller countries of Greece, Ireland and Portugal have already been forced to accept international bailouts.

Europe's emergency fund is insufficient to keep afloat either Italy or Spain, respectively the third- and fourth-largest economies in the Eurozone, the 17-nation bloc that uses the euro currency.

At their two-day summit that ended Friday, European leaders had been expected to negotiate beefing up the $660-billion bailout fund by half, an expansion urged by the International Monetary Fund, the United States and other countries.

Return to economic growth and jobs?

But that discussion was postponed because Germany, the biggest contributor, has resisted those calls. The Germans have argued that an increase would send the wrong signal by relieving pressure on Rome, Madrid and others to cut spending and enact difficult structural reforms. There are signs that Chancellor Angela Merkel may yet relent, but no action is expected before the end of the month.

Berlin has reserved its energy for pushing through the treaty on capping spending and debt. European officials acknowledge that enforcing the accord will be tricky; the agreement that set up the euro, which contained similar provisions on fiscal restraint, was routinely violated, including by Germany.

Still, Herman Van Rompuy, president of the European Council, which provides direction for the EU, hailed the pact as the beginning of a new era of prudent stewardship. He said the accord would create the conditions for a badly needed return to economic growth, without which financially troubled European nations will have no way of clawing their way out of debt.

In Spain, for example, a new government forecast suggests that the economy will contract by 1.7% this year and that the unemployment rate will top 24% as austerity cuts take their toll.

"This stronger self-constraint by each and every one of you as regards debts and deficits is important in itself. It helps prevent a repetition of the sovereign debt crisis," Van Rompuy said. "The restoration of confidence in the future of the Eurozone will lead to economic growth and jobs. This is our ultimate objective."

The euro debt crisis has been more muted so far this year, in stark contrast to the end of 2011, when some analysts were predicting the imminent breakup of the currency union and the demise of the euro.

Many credit the European Central Bank's decision to issue special long-term, low-interest loans in December and February with calming the situation. The loans allowed the region's banks to buy up bonds of financially distressed countries, which helped bring down those nations' borrowing costs.

But Merkel warned against complacency.

"We remain in a fragile situation," she said in Brussels. "The crisis is far from over." 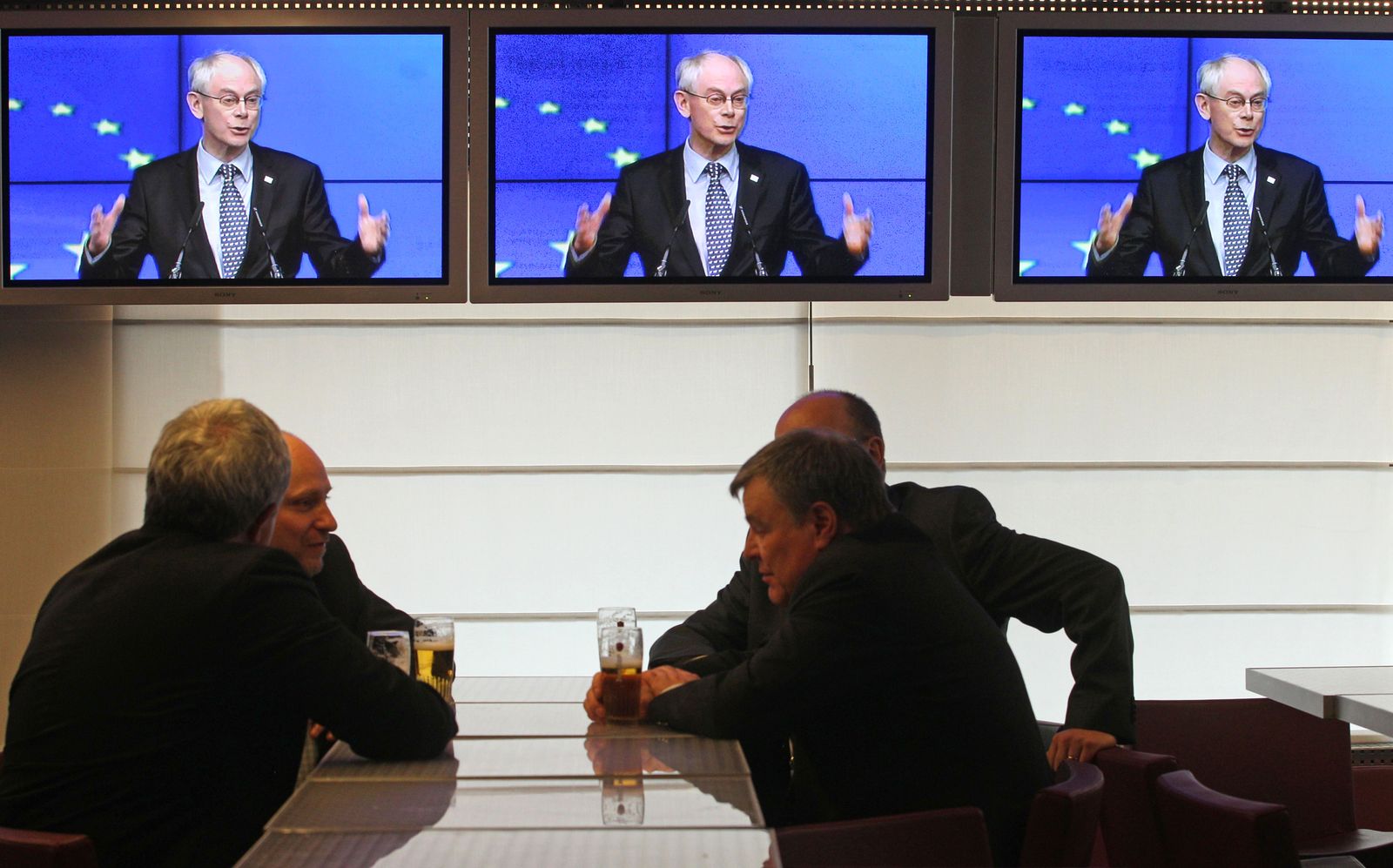