Ask people to pinpoint the centre of the digital economy and many will finger Silicon Valley, populated by Apple, Google, Facebook and too many sexy startups to count. Others may nod at the area around Seattle, where Amazon and Microsoft are based. Some could suggest Shenzhen, China’s technology hub. Few would point to a nondescript suburb of Eindhoven, the Netherlands’ fifth-biggest city. Yet on closer inspection, the case for Veldhoven looks compelling. It is home to ASML, the world’s sole manufacturer of the most advanced equipment critical to modern chipmaking. If chips make the world go round, ASML may be the closest the multi-trillion-dollar global tech industry has to a linchpin.

ASML is not the only maker of photolithographic machines, which use light to etch integrated circuits onto silicon wafers. It competes with Canon and Nikon of Japan. But the Dutch firm’s market share has nearly doubled, to 62%, since 2005. And it alone has harnessed “extreme ultraviolet” (EUV) light, with wavelengths of just 13.5 nanometres (billionths of a metre). Shorter wavelengths allow the etching of smaller components—vital for chipmakers striving to keep pace with Moore’s Law, which posits that the number of components that can be squeezed into a given area of silicon doubles roughly every two years. The world’s three leading chipmakers—Intel in America, Samsung in South Korea and the Taiwan Semiconductor Manufacturing Company (TSMC)—have become as reliant on ASML’s wares as the rest of the technology industry is on theirs. 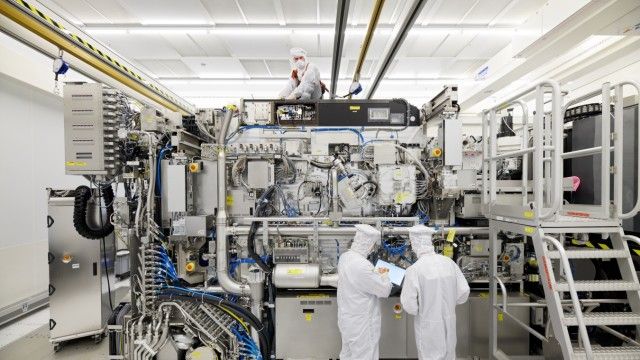