Editor's Note: The article was originally published in The Guardian.

Here is important news for the British prime minister and her media acolytes: It isn't just Jean-Claude Juncker who believes that Mrs. May lives in another galaxy. Most leaders in continental Europe believe that. This includes Angela Merkel.

The German chancellor never took kindly to May's blatant attempt early on after the Brexit vote to create a "W2" - an alliance of the two powerful ladies of Europe - to get Britain a special deal.

That has always been a pipe dream. Merkel is firmly driven by safeguarding Europe's future, not the pursuit of gender-based political deals.

Truth be told, the German chancellor must increasingly feel as if she is dealing with a female Erdogan at Downing Street No. 10 - a British leader so wrapped in her own world that she has lost touch not just with European realities, but the fundamentals of international negotiations.

Definitely not doing the "British thing"

For a Turkish President to act in an aloof, shrill and pompous manner is one thing. For a British prime minister to do likewise s something else completely.

The total absence of any sense of realism and pragmatism in May's camp represents a profound culture shock not just for official Berlin, but all European capitals.

Contrary to her own claims, Mrs. May is not at all acting in a Churchillian manner. Rather than doing "the British thing" and pragmatically adjusting the nation's flawed strategy post-haste, May and her party are digging themselves in and resorting to Macho-style rituals of self-assurance.

As a matter of fact, May is acting in the style of German politicians of yesteryear.

"Divide and rule" not working

But it isn't just continental Europe that is shocked. In a purely domestic British context, the people of Northern Ireland, Wales and Scotland have plenty of reason to be shocked as well.

They could only dream of having a prime minister that would be as concerned about internal unity and cohesion as the leaders of the EU 27 nations have proven to be.

On the Brexit matter, 27 different nations are showing a sense of internal cohesion and solidarity with one another that is far greater than what Theresa May has been willing to accord to the constituent parts of her supposedly "United" Kingdom. To have her way, she risks the disintegration of the UK.

No wonder she and her ministers are going berserk over the EU 27's unified stance on the negotiating mandate.

The Tories are also furious because their customary "divide and rule" strategy toward Europe does not work at all. The British art of "splittism" failed very early on - in the very moment that the Brexit campaign zeroed in so centrally on Polish workers in the UK.

What the Tories have missed

With that one move, any realistic hope for the kind of deal May still hopes for was lost. The Polish government, under Kaczynski's tutelage, would have been the only one pesky enough by temperament and relevant enough by weight to try and topple the entire EU bandwagon.

Hitting at Polish workers so hard may have won the Tories the Brexit vote. But it was a Pyrrhic victory. With that one move, the UK lost any hope for the Polish government to act as a much-needed spoiler on its behalf inside the EU camp. This is all the more painful as Poland is a traditional UK ally, especially against Germany.

What hurts the Tories greatly now is that they are so remote from EU realities because of their fundamental disdain of all things European (other than perhaps fine French wines).

That deliberate cultural remoteness is a key reason why they missed the big story of the Brexit vote - that Britain's planned exit serves the rest of the EU as great glue.

The Tories have overlooked this, but Angela Merkel surely hasn't. She is actually very British in her political style. She certainly did not want the outcome of the Brexit vote as it materialized.

But now that it's there, she is determined to turn a calamity into an unexpected, but very welcome opportunity to increase the EU 27's cohesion.

Merkel not taking any of it

The reason why Juncker's dinner at Downing Street, contrary to the May Day machine's PR efforts, was no surprise was because Angela Merkel signaled as much in her speech to the German parliament in late April.

Merkel - usually not a woman of clear words - left no doubt that she considers May's negotiating strategy totally unrealistic. That is why, for all intents and purposes, Merkel decided to interfere in the British elections.

When she said in the German Bundestag that the deal May envisions can't be had, she destroyed her British colleague's artfully created narrative.

Merkel never takes kindly to upstarts who try to rock the boat, whether for reasons of vanity, immaturity or lack of realism.

The likely reason for Merkel's drastic step is that she believes that Theresa May feels so encouraged and resolute in her stance because she is stuck listening to her own echo chamber.

The Tories miscalculated badly: Merkel not only stands 100% behind the EU 27's chosen path. She has been pretty much the one pushing for it, realizing that the EU will not have a better reason to re-learn how to stand together than through Theresa May's gift of folly.

On this issue, even amidst a brewing campaign in Germany ahead of the September elections, in which Merkel seeks a fourth term as chancellor, Merkel and her grand coalition partner, the SPD, stand completely united.

That is also why the hopes pedaled by some "strategists" in London (really Tory propagandists) that an SPD-led government would be more lenient toward the UK exiting is a flight of fancy.

In fact, long though the odds may be, the German government believes that its - and all of Europe's - interests are best served by England coming to its senses at some point and abandoning Brexit.

That is one more reason why May's willingness to prefer "no deal" to a "bad deal" may turn into one of the biggest own goals in diplomatic history.

The Federal Republic has long operated on the basis of one core conviction: Only an EU with the UK still on the inside is a really strong EU.

But Berlin draws a very different conclusion from that than does London. From the German vantage point, it means that playing tough with the Brexiteers is just what this longshot strategy requires.

It decidedly does not mean that the German government would lean over backwards to accommodate the UK on its exit strategy. That is another profound miscalculation in London.

Germany not ready to compromise

Germany's strategy toward the UK is driven by whatever it can do to strengthen the critical dimension of market-oriented thinking in the European economy (that it regards as deficient in several other EU economies).

As a consequence, there is no appetite whatsoever in Germany for compromise with the Tories, although the latter - in their increasing despair - still hope for it down the stretch.

From the German vantage point, a different logic would only apply to a UK revising the Brexit agenda and wanting to stay inside the EU.

Even if May were to obtain a "strong mandate" from the voters in June, in the rest of Europe this would largely be interpreted as a strong, but surreal "refusenik" vote that abstracts from people's own economic interests.

But there is more bad news for May. Her snap elections are ill-timed. The Brexit camp's central narrative - we in the UK are doing so much better than the rest of the EU - is crumbling just as she has chosen to launch an election campaign.

Not only are there visible storm clouds on the British economy's horizon, but the EU economy - the supposed graveyard of Britain's dynamism - is showing signs of real recovery.

May: Trump of Europe?

Politicians on the continent have a clear appreciation that the Brexit vote was first and foremost a "venting" vote.

British working class voters, too cowed to see the Tories for what they are, were directed to vent their anger against Brussels as a veritable piñata, to ensure that they don't direct their anger at British elites.

Far from May's erstwhile hopes to lead a sovereignty revolution, she is increasingly revealing herself as the Trump of Europe: Whatever strategic mistakes she commits - and there are many - she is instinctively inclined to blame other nations for her own flaws and miscalculations.

In short: She is already prepared to throw all the fear-mongering Tory propaganda into the bathtub.

In her increasing shrillness, May is beginning to sound like Marine LePen, of France's Front National. This expresses itself not just in their joint ardent border-closing mindset.

It also manifests itself in the illusory belief that "sovereignty" has wealth-creating functions for lower-class workers.

To some, this comparison, though it is real, may seem unfair. But even those voices should ask themselves about one perhaps inconvenient, but still powerful basic fact of European history - guilt by association.

In conclusion, the real surprise about May's Brexit strategy is that it represents a big departure from the unflinchingly reality-based political assessments that have been the hallmark of Britain's international policies for centuries.

To date, the UK has not been known to hang the outcome of an iffy national strategy on a reed. But Theresa May is trying just that. 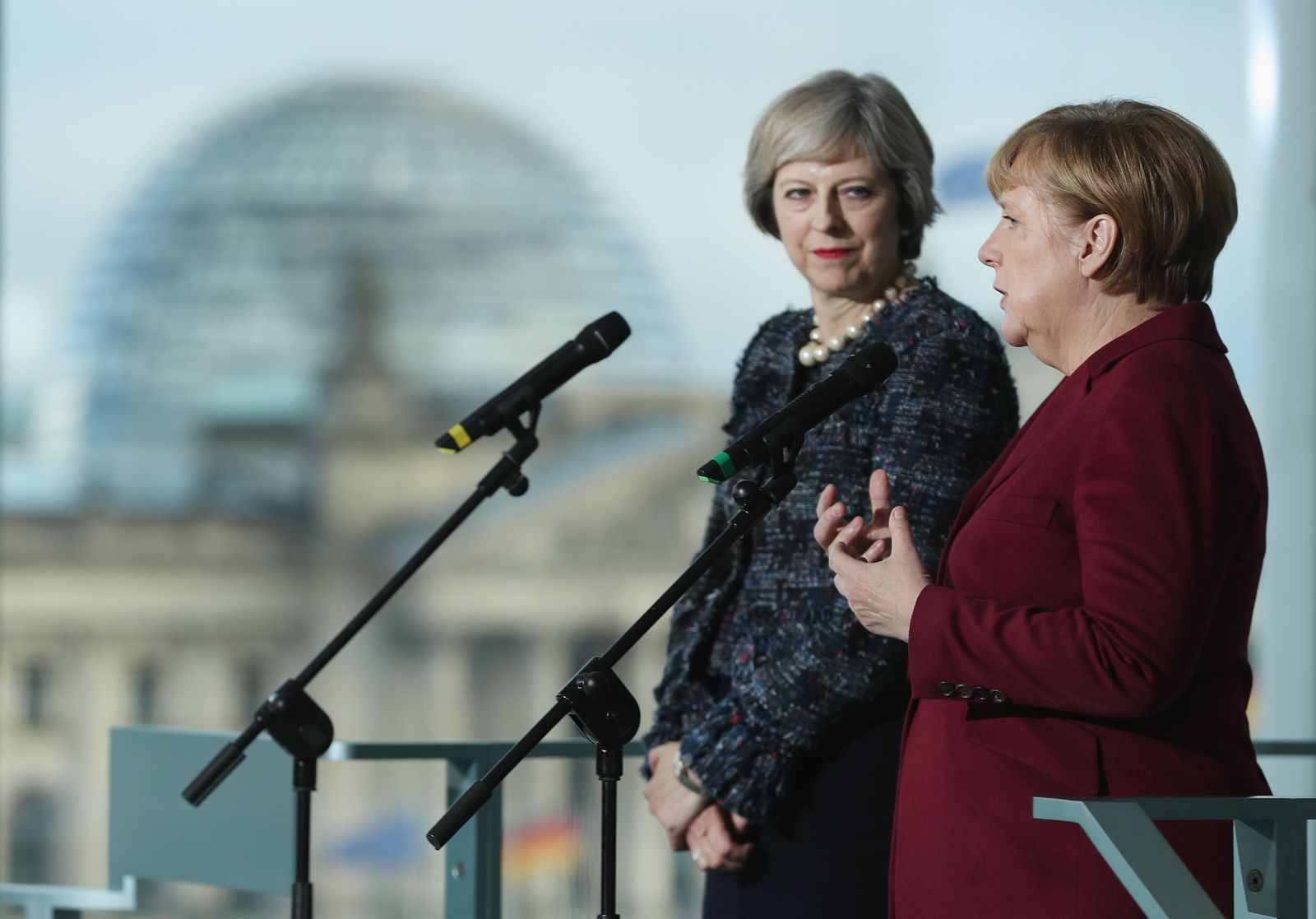