When the Dow Jones industrial average plunged 387 points on Aug. 9, Wall Street worried that the subprime mortgage crisis was finally dragging down other sectors of the economy. It's easy to see why. The real estate market, such a rock-solid investment since the tech bubble collapsed earlier this decade, had swiftly become a bad bet whose big bill has come due-prompting fears that other sectors of the economy will be forced to pay the tab, too.

But so far, despite the technology sector's well-worn reputation for swinging more wildly than the broad market in times of turmoil, tech has been a pasture of calm in recent weeks. In fact, instead of joining the chorus of worry over possible contagions from the subprime lending crisis, some leading technology companies have chirped merrily about the business outlook. Many tech stocks have retreated more gently compared with the market, and some have even risen.

Computer maker Hewlett-Packard (HPQ) reported on Aug. 16 that profits from sales of personal computers jumped 29% in the third quarter from the previous year (see BusinessWeek.com, 8/16/07, "HP: 'Firing on All Cylinders'"). The company's stock has declined 1.5% since July 19, the day before stocks took their first big dive due to credit concerns.

Shares of Cisco Systems (CSCO), however, are up slightly over the same period, fueled by a bullish earnings report and revenue forecast on Aug. 7. Most telling, shares of VMware (VMW) have more than doubled since the software maker's Aug. 14 initial public offering, from $29 to $71.30 per share, despite concerns that a credit crunch could stem business buying (see BusinessWeek.com, 8/14/07, "VMware Shrugs Off Shaky Markets").

The tech sector's relatively solid performance seems counterintuitive. After all, if people can't pay their mortgages or easily borrow against their houses, it seems to follow that they'll need to tighten their purse strings when it comes to new purchases. That would mean fewer people upgrading to new PCs, big-screen TVs, and assorted gadgets, as well as less online shopping in general. And beyond the direct hit to consumer technology spending, a general slowdown in the economy would mean less revenue for businesses that, in turn, might delay upgrades to their technology systems.

There's good reason, however, why tech companies might perform well amid current conditions. Technology companies, which traditionally do not carry much debt, are looking like a safe alternative to the housing market and the heavily leveraged financial sector. "Money has got to go somewhere," says David Geltner, director of the Massachusetts Institute of Technology's Center for Real Estate and a professor of real estate finance. "A lot of money left the tech sector in the early part of this decade and went to real estate, and now maybe some of that money will leave real estate and make its way back to tech." Geltner says the shift is already happening, as does Scott Kessler, senior director of information technology at Standard & Poors. (S&P is owned by BusinessWeek parent, The McGraw-Hill Companies (MHP).) "A lot of people have been looking to technology as somewhat of a safe haven," Kessler says.

The optimism reaches several areas of tech, including online advertising, which some believe may actually get a boost-even as the housing slump causes some financial services companies to curtail the long-running bonanza in Web ads for the sort of risky mortgages and loans that led to the current lending crisis. 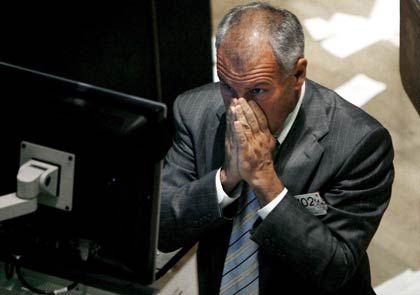 Technology companies, which traditionally do not carry much debt, are looking like a safe alternative to the housing market and the heavily leveraged financial sector.

For one, it is generally cheaper to reach 1% of households using the Internet than it is to reach them via print and television campaigns, says Tim Vanderhook, chief executive of ad-targeting network SpecificMedia. Many premium sites charge $30 to $200 for every 1,000 people who see an ad. Television ads fall in roughly the same price range for cost per 1,000 views. However, nonpremium sites without clearly targeted content-a category comprising most of the Web including e-mail sites, social networks, and most user-generated content sites-charge $20 or less. The nonpremium price typically increases a few dollars when ad networks apply additional targeting, but is still often cheaper than advertising in other media. As a result, when marketers needs to trim the budget, but still reach as many people as possible, they are likely to opt to spend less on other media formats and more online.

S&P's Kessler also says a marketing budget crunch could accelerate the shift of advertising dollars from traditional media to online. "Online is a lot less expensive, and you can spend it in small bites," says Kessler. "When you do television buys, they are generally big commitments where money is required up front."

Financial Advertising Could Take a Hit

In an economic downturn, the measurability of Web advertising would also make the online venue more attractive than competing mediums, says Dave Morgan, chairman and founder of online ad-targeting network Tacoda. "When budgets are scrutinized by the CFO and the cost-cutters, online always does better with return on investment," says Morgan. Online marketers, Morgan adds, can provide statistics concerning, for example, how many people clicked on an ad or whether they went to the company's Web site and completed a purchase.

The fear is that Google (GOOG), Yahoo! (YHOO), and other largely ad-supported Web companies will suffer as financial institutions cut back on marketing the sort of risky mortgages and loans that got them into the current mess. According to an Aug. 21 report by market research firm MultiMedia Intelligence, half of the top 10 Web advertisers are mortgage and credit-card companies. "Part of that [online advertising] growth has been stimulated by these mortgage advertisers," says Rick Sizemore, MultiMedia Intelligence's chief strategy officer. "If they are not replaced by some other industry...the money will start drying up."

Financial-services marketing was the second-largest category for online ad spending in 2006, accounting for $2.7 billion of the nearly $16.9 billion spent on Internet marketing in the U.S., according to the Interactive Advertising Bureau. The leading category last year, accounting for 52% of the total, was consumer marketing, which encompasses retail, automotive, travel, leisure, entertainment, and packaged goods ads.

Some Internet advertisers say they have already noticed some lenders scaling back on marketing. "About two years ago, how many 'Lower My Bills' ads did you see? A lot, everywhere you went," says Vanderhook. "How many do you see right now? A lot less."

All of the benefits to online companies assume a relatively benign economic downturn from a credit crunch. In the advent of a serious, lengthy recession, Internet companies would undoubtedly suffer as well. Marketers would be forced to scale back advertising across the board. A wide-scale credit crunch would prevent some small businesses and consumers who finance their tech expenditures from buying. Moreover, in a recession, businesses try to avoid upgrading technology systems for as long as possible, further affecting many tech companies' bottom lines.

Big Companies Could Be Hurt the Most

In the advent of a serious, lengthy recession, Internet companies would undoubtedly suffer as well.

Other tech companies that could be affected by the mortgage malaise include cable TV providers such as Comcast (CMCSA) and satellite TV operators such as DirecTV Group (DTV), say researchers at Sanford C. Bernstein & Co. "Slower additions to the housing supply, coupled with a rising vacancy rate, will directly translate into slower subscriber growth, or larger subscriber losses, for all players, in our view," analysts led by Craig Moffett wrote in a research report dated Aug. 24.

Furthermore, a recession would hit some of today's most well-known, large startups hard, says Todd Dagres, a founder and general partner at Boston venture firm Spark Capital. Instead of going public or getting acquired, many of these firms would have to raise another unexpected round of investment to keep their companies going while they await better economic conditions. "The ones that get hurt are the later stage companies that were hoping to get sold or acquired before the next round of funding," explains Dagres.

Smaller tech startups would likely remain unscathed because they have smaller staffs to support and can cut back, more easily, on spending. Also, they need to generate less revenue to stay afloat. "Startups are surprisingly resilient to economic downturns," says Shinya Akamine a Silicon Valley veteran whose last company, Postini, survived the tech bubble and was recently purchased by Google for more than $625 million. "As soon as we got funded, the Internet collapsed and we had to just hunker down." Akamine says that, should another recession come along, he is prepared to do the same thing with his new company, BlueRoads, which helps businesses manage their sales channels.

Akamine doesn't need to prepare for the worst just yet. While the housing downturn may not be over, Dagres says that the Federal Reserve is giving the impression that it will step in to help the economy before the subprime market has a significant impact on other sectors. And MIT's Geltner says the economy is still "fundamentally strong."

Holahan is a writer for BusinessWeek.com in New York.