It sure sounds like a steal. On Aug. 31, George Hotz plans to trade in his iPhone for a metallic blue Nissan (NSANY) 350Z sports car and three brand-new iPhones. But the 17-year-old's device is no ordinary Apple phone. Hotz hacked his iPhone and unlocked it so that it can be used on a variety of cell-phone networks, becoming the first person known to have done so. The person buying Hotz's phone, Terry Daidone, believes he's the one getting the deal because Hotz has agreed to work for him at his cell-phone refurbishing company, CertiCell.

Daidone says he doesn't plan to sell unlocked iPhones just yet. Rather, he says that he wants Hotz to teach CertiCell's technicians the secrets to unlocking other kinds of cell phones. But that could change - if he can clear up legal questions surrounding the practice of unlocking mobile phones. "As the need arises to unlock phones, we should be at the forefront of that," Daidone says.

Apple (AAPL) and AT&T (T), the sole authorized supplier of the iPhone in the U.S., are doing what they can to make sure that legal clearance never comes. The two companies have put their lawyers on the case, applying pressure on hackers involved in unlocking iPhones to try to get them to stop. Much is at stake. AT&T has been hoping that as the exclusive provider of the iPhone, it will see a surge in new customers and monthly service charges of at least $60 from each one. Apple is supposed to get a cut of the revenues. If iPhones are unlocked, they can be used on the wireless networks of rivals like T-Mobile USA - and AT&T gets zippo. AT&T wouldn't comment for this story, while Apple didn't return a request for comment.

So will Apple and AT&T's legal action deter hackers? Hardly. Individual users are already allowed to unlock their own phones under an exemption to the Digital Millennium Copyright Act (DMCA) that the U.S. Copyright Office issued last November. The exemption, in force for three years, applies to "computer programs ... that enable wireless telephone handsets to connect to a wireless telephone communication network, when circumvention is accomplished for the sole purpose of lawfully connecting to a wireless telephone communication network."

What's less clear is whether companies and hackers can legally unlock the phones and then sell them to others, or sell unlocking software. "The law here is unclear," says Jonathan Kramer, founder of Kramer Telecom Law Firm in Los Angeles. "There just isn't any case law in this area for us to figure out how it plays out."

Problem is, it could be argued that, in reality, the lock only protects access to a carrier's communications network - and communications services aren't copyrightable under the Act, explains Jane Ginsburg, professor of literary and artistic property law at Columbia Law School. "This law was written for DVDs and video games," she explains. "What's going on here is using the Copyright Act to achieve another objective."

Fuddling with the iPhone: Demand for unlocked iPhones is rising

Indeed, this time, hackers may have the law on their side. Remember, decades ago, automakers built their instrument panels so that only authorized radios of their own manufacture would fit in. Eventually, U.S. courts ended that practice.

"If Apple and AT&T push too hard, they might see a revision of [the Copyright Act, and it won't be in their favor]," says Richard Doherty, director of consultancy the Envisioneering Group.

That's why, for now, some hackers contacted by AT&T lawyers still plan to release their wares. "Over the next few days...you will get what you are looking for," promises an Aug. 27 message posted on the Web site of UniquePhones, which helps people unlock mobile phones.

Opening up the networks

Demand for unlocked iPhones, which sell for $499 and $599, is rising. Already, the phone has become a cultural phenomenon, with enthusiastic fans going to great lengths to get their hands on one. Consumers in rural areas where AT&T doesn't have a network or in markets with spotty AT&T coverage may want to use the popular device through T-Mobile's network. Overseas, consumers want to try it in conjunction with Orange (FTE) and Vodafone (VOD) wireless service. "If Apple offered unlocked iPhones for $1,200, they'd probably sell some," Doherty says.

iPhone in the courtroom

iPhone in the courtroom 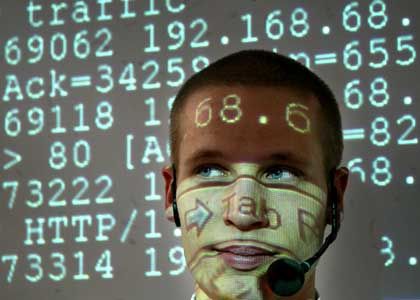 Shifting borders: Hackers may have the law on their side

Frustration over locked iPhones is showing up in the courts as well. A class-action lawsuit filed on Aug. 27 in the Supreme Court of the State of New York tells of an iPhone buyer who racked up $2,000 in charges because he couldn't use a different carrier's network while he was on a trip to Mexico. Filed against Apple, the suit claims the plaintiff didn't know that iPhone was tethered to the AT&T network.

Many hope that the legal wrangling will, eventually, result in major shifts in how the U.S. wireless industry operates. For one, a case could pave the way to making all wireless networks more open to unlocked phones. In the next five years, 10% to 15% of U.S. wireless users could move to unlocked phones, figures Andrei Jezierski, founder of venture consultancy i2 Partners in New York (see BusinessWeek.com, 12/4/06, "Motorola, Nokia Set Cell Phones Free").

Plus, to answer pent-up demand for untethered phones, a cell-phone carrier could differentiate its offerings by selling all of its handsets unlocked, says David Chamberlain, an analyst with consultancy In-Stat. "It's an anomaly that the phones are tied to individual carriers," he says. "Can we change that business as usual? Maybe. But people who want that will fight for a very long time."

Kharif is a reporter for BusinessWeek.com in Portland, Ore.